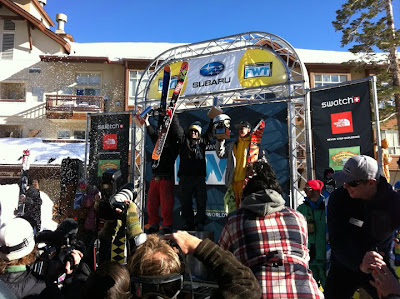 This was a historic weekend for Tahoe. Once again the World Free Skiing Championship comes to Kirkwood for it's last stop of the year. This event in one of the things Kirkwood is most known for. It's the only time of the year when the legendary Kirkwood Cirque is open. Skiers and boarders wait all year and stare at this steep rocky bowl, dreaming of the lines they would ride. Kirkwood Local ski shred and California Green Rush athlete Josh Daiek is no stranger to this competition. He and local Legend Craig Garbiel have been on the circuit for years now, tearing it hard and representing Kirkwood style at every event. Once a year the tour comes to Kirkwood and boys get to throw it down in front of the home town crowd. The tour was set back one day due to a perfect winter storm that blessed our slopes with a few feet of fresh cold sierra goodness. Tour veteran Graig "Garbonz" Garbiel was already qualified for the finals from a previous event. Baby J had to ride the Lookout Vista to Qualify on Saturday. With a beautiful fresh coat of powder, Josh ripped top to bottom and sent a huge 3 over some rocks, taking the first place spot for the day and solidifying a spot in the finals. Day two they switched things up from the usual format and dropped all skiers from the lookers left drop in at Carnels Shoot on top of the Cirque. Named after long time local and one of Kirkwoods first ski patrols, John Carnel. Craig ripped a super solid top to bottom line. Coming off the ridge, airing over Meat Grinder, then sending a huge air off lower Franks, then blasting Kodak cliffs with one of the biggest airs possible. It was a super impressive line. But this year belonged to Josh. He ripped one of the most solid lines ever thrown down in this comp. Top to bottom power turns, a huge air off Franks alternate and another monster super stomper off Kodak. Josh clocked the highest score of the entire comp and kept himself in first place. He also scored a Sick Bird nomination. Sitting in first, Josh dropped last on day 3. With the pressure of the entire event laying on his shoulders, he held it together and ripped another solid top to bottom destroyer run from Hour Glass on down to the finnish line where he was met by all the Kirkwood local for a huge celebration. It's like it was known before they even announced the results. Josh ended up winning the comp and scoring the Sick Bird award. Way to go Baby J. Super solid.
Here's a video of Josh's run on Sunday.

Here's a another preview of some of Josh's other favorite hobby, Ski Base Jumping. Keep an eye out for Baby J's full part coming this fall in California Green Rush.